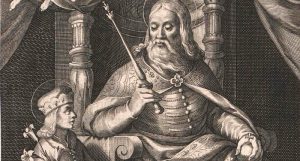 The Hungarian capital – Budapest, celebrates the feast of Saint Stephen, on the twentieth of August every year.

Saint Stephen was born in the city of Estergum in the Principality of Hungary in 975 and died on August 15, 1038. Before his birth, his mother, Duchess Sarlot, had dremt and she saw Saint Stephen I – the first martyr of the Church – telling her that she would give birth to a child who would evangelized their land .

Geza had desired to convert the Hungarians to the Catholic faith, a passion shared by Stephen once he reached adulthood and succeeded him in power. After conclusively defeating an alliance of rival pagan nobility, he used their acquired wealth to build a monastery, and invited clergy to convert the people.

Stephen established laws favoring Christianity over paganism, and sent an emissary to Rome with a request for the Pope to proclaim him as king. Pope Sylvester II accepted the request, sending him a crown and a gold processional cross, while also giving Stephen certain religious privileges.

He showed great diligence as king, while devoting the rest of his time to his religious duties – including charity toward the poor and sick, as well as the worship of God – and to his household. Gisela, Stephen’s wife, was the sister of the ruler later canonized as the Holy Roman Emperor Saint Henry II.

In 1038, Stephen delivered his final words to leaders of the Church and state, telling them to protect and spread the Catholic faith. St. Stephen of Hungary died on Aug. 15, 1038. He was buried alongside his son St. Emeric, and the two were canonized together in August 15,  1083.

During his tenure, he worked to spread Christianity widely on the European continent, and is generally considered to be the founder of the Hungarian Empire. Pope Gregory VII declared His Holiness Stephen and his son, Saint Emeric, Prince of Hungary on August 20, 1083, and Stephen became one of the most famous Christian saints in Hungary and Europe, and August 20 is considered an annual feast day in Hungary, celebrated as a public national holiday to commemorate State establishment.

From the touristic side, the statue of Saint Stephen in the heart of Budapest, the capital of Hungary, and Saint Stephen’s Cathedral, as well as some of the saint’s personal holdings in the Cathedral and city museums are among the most important places that you must visit while visiting Budapest – Hungary (Heart of Europe).

Scroll to top
We use cookies on our website to give you the most relevant experience by remembering your preferences and repeat visits. By clicking “Accept”, you consent to the use of ALL the cookies.
Cookie settingsACCEPT
Manage consent

This website uses cookies to improve your experience while you navigate through the website. Out of these, the cookies that are categorized as necessary are stored on your browser as they are essential for the working of basic functionalities of the website. We also use third-party cookies that help us analyze and understand how you use this website. These cookies will be stored in your browser only with your consent. You also have the option to opt-out of these cookies. But opting out of some of these cookies may affect your browsing experience.
Necessary Always Enabled
Necessary cookies are absolutely essential for the website to function properly. These cookies ensure basic functionalities and security features of the website, anonymously.
Functional
Functional cookies help to perform certain functionalities like sharing the content of the website on social media platforms, collect feedbacks, and other third-party features.
Performance
Performance cookies are used to understand and analyze the key performance indexes of the website which helps in delivering a better user experience for the visitors.
Analytics
Analytical cookies are used to understand how visitors interact with the website. These cookies help provide information on metrics the number of visitors, bounce rate, traffic source, etc.
Advertisement
Advertisement cookies are used to provide visitors with relevant ads and marketing campaigns. These cookies track visitors across websites and collect information to provide customized ads.
Others
Other uncategorized cookies are those that are being analyzed and have not been classified into a category as yet.
SAVE & ACCEPT